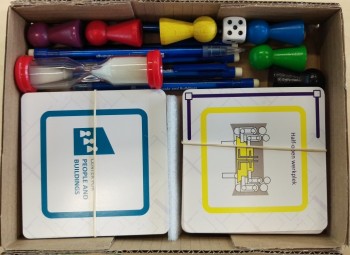 Our international (non-Dutch) versions of the Workplace Game have become a popular tool to openly discuss behaviour in the workplace. With translated versions in French, English and German it has been used in many different countries and contexts. But until now, due to the relatively small demand, we have been using a demo version of the Game. This version is fully functional, but has a less polished look than the original Dutch box. Now the time has come to create a better version of the game material!

We are currently developing a new international Workplace Game box, which will improve the look and feel of the international versions. Soon we will be able to present you the new and improved French, English and German Workplace Game! And who knows, maybe the development of an Italian and Spanish version could be just around the corner.

The image above is a possible prototype.