You are here: Home>News>Playing a heated game in Qatar or rather a cold...

Playing a heated game in Qatar or rather a cold and dark one in Sweden? 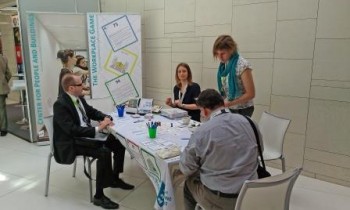 During the European Facility Management Conference (EFMC) in Berlin Evi De Bruyne and Fien Thoolen of CfPB presented the Workplace Game. Here you find a selection of their experiences and the most notable encounters.

With two banners and a tablecloth we made our way to our designated spot, in between the other exhibitors: sandwiched between two stands, in a very small corner with room for exactly one table. This would be our spot. Not exactly what we imagined! Fortunately, the organization recognized that this corner did not suit us and we got a new spot where many people would pass, and near the buffet: not bad! Our table finally got a lot of attention: to see a game between all those big serious companies made many visitors curious.

Interest from all corners of the world

Representatives from over 15 countries showed interest in the Workplace Game, from Iceland to Peru, from Japan to North America. The Swedes told us the Game would catch on in their country: after all, playing games is popular in a place with long, cold winter days. People from Qatar asked whether the Workplace Game would suit their country: ‘We have many people with very diverse backgrounds and nationalities, including veiled women of whom you can only see the eyes. Could the game be used with this target group, to get their opinion and feelings of the workplace on the table, and without seeing facial expressions’?

We also talked about issues closer to home: for example with people of a large museum in Amsterdam. We had never thought that they would have so many office workplaces! And there was someone from an energy company within the Netherlands that suggested to customise a game specifically for their organization: with photos of employees and managers on the pawns. Wouldn’t that be nice?

In short: enough interest from all over the world and a lot of connections to follow up on! The Workplace Game in Arabic, how would that look like?